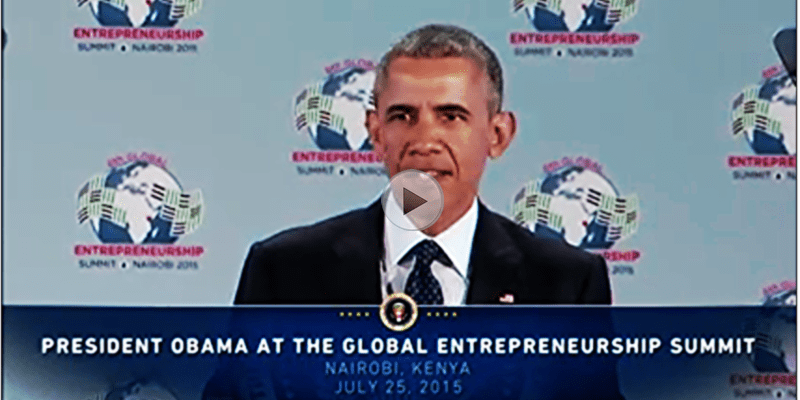 DotAfrica.TV brings to you views and opinions of the Global Entrepreneurship Summit  GES2015  Nairobi, Kenya

“The future of Africa is up to Africans. For too long many looked to the outside for salvation.” —President Barack Obama at GES, Kenya

Africa is not only rising; it is also the most preferred investment destination and is the continent of the fastest growing economies globally.   Kenya which is the home of Mobile money transfer technology Mpesa , is especially considered a budding tech hub, with Nairobi ranked among the most connected cities in Africa.

President Obama noted that  “Africa is on the move, Africa is one of the fastest growing regions in the world” and that “Entrepreneurship offers a positive alternative to the ideologies of violence and division that can all too often fill the void when young people don’t see a future for themselves”.

Weighing on the profound principles of Entrepreneurship, President Obama conveyed:

He was also very vocal on supporting girls and women; he noted that they are important agents of development in any society:  Here are some of his quotes on women and girls:

Speaking at the Summit, President Uhuru Kenyatta who was the Co-host of the GES2015 Kenya Summit said that Africa is open and ready for business.  He added that “Africa is the world’s newest and most promising frontier of limitless opportunity” . On the youth he said  “As large parts of the world age, Africa grows younger by the day. The youthful sons and daughters of Africa are our incredible resource”

Sophia Bekele, who was invited to address the forum as part of  the “African Diaspora Leaders” spoke on the future of Africa, saying

“more people look out for the “American Dream” but I believe now we should be looking forward to building the #BuildAfricaDream and put that in the DNA of all the students who get an opportunity to study here.”

DotConnectAfrica through its various initiatives such as Generation.Africa, Miss.Africa, DCA Academy, DotAfrica.TV and DotAfrica.Mobi welcomes these messages that offer as a catalyst to Africa’s growing youth population that is innovative and creative.  Africa is the continent with the youngest population at its disposal and with these DotConnectAfrica is ready to launch into a better tomorrow.