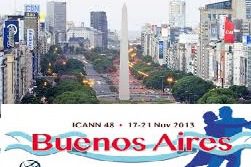 PRLog (Press Release) – Nov. 26, 2013 – DotConnectAfrica delegates were among more than 1,700 people from around the world that attended the just concluded ICANN 48 International Meeting that took place in Buenos Aires Argentina from November 17, 2013 to November 21, 2013.

Buenos Aires is the capital of Argentina, the second largest country in Latin America, and itself the second largest city of South America. It is located on the western shore of the estuary of the Río de la Plata (River Plate), on the southeastern coast of the South American continent. The well-known Argentinean football club, ‘River Plate’ is named after the Río de la Plata, which has been the gateway to Argentina for centuries. Portenos, as the multinational people of Buenos Aires are known, possess an elaborate and rich cultural identity.

This is the same energy that was experienced at the 48 ICANN meeting which took place at a time that ICANN is also celebrating the fifteenth anniversary of its establishment. “Today, we can celebrate success. The gTLD program is off the ground,” remarked Chehadé. “In fact, we have added more new gTLDs to the root today than all the gTLDs in the history of ICANN”.

The new gTLD program that has reached mature stages and several new gTLD applicants have signed their contracts to begin the process to delegate and administer the new domains that are seen as the new platform of communication, development and tech-growth that is intended to catalyze and create a new unique identity.

DotConnectAfrica, an applicant for .africa new gTLD also got an opportunity to provide an update on its status in the various forums. DCA delegates were invited to the various business forum activities at ICANN to which it actively participated and contributed.

In recent times there has been a renewed interest in factors concerning internet governance. While discussing the same issue, ICANN President and CEO, Fadi Chehadé said that “ICANN is part of an ecosystem, and the environment around us affects us….We have to be engaged. It doesn’t mean we leave behind our responsibilities. It doesn’t mean we increase our responsibilities, but we have to also be active participants in the ecosystem, this is central to the multi-stakeholder success on a global level.”

Participating during the AfriICANN/AFRELO session and in response to the key subject matter relating to the lack of increased participation of Africans in the ICANN meetings, said to be caused by either discontinuation of donor funding and which has caused a vacuum in continued contribution of Africans in the ICANN processes, Ms. Sophia Bekele, our CEO stated the following on behalf of DCA,

“We want to thank the organizers of Afralo in their continuous commitment to this open and transparent sessions they hold to ensure that all of African voices are heard.  In light of this, and the particular subject of participation that we are now discussing, I want to bring to light that many of you here today know our work at ICANN and in Africa, including Monsieur Pierre Dandjinou of ICANN, who is present here.

DCA has been an active participant at ICANN since 2005, and has championed various ICANN and Africa initiatives, including promoting new gTLDs, multi-stakeholder model, Internet Governance issues, and corporate sponsorship of ICANN events.  On top of that, we are an applicant for the .africa new gTLD.  Our contributions to the ICANN Process and Africa have been immense, but our knowledge and expertise are yet to be utilized by the current ICANN operatives.  Despite the issues I hear in this forum regarding lack of participation, the process itself has isolated those who participate like DCA.

Why has ICANN not included the work of DCA and its people as a resource to your overall strategy? We pay our way to come to these meetings means we are serious and passionate about our work and so we should be taken seriously and integrated as part of the ICANN strategy that you are building Mr. Pierre and I do not see that”, said Bekele posing the question to the VP of African Region.

The comments were well received by the organizers and the audience.

A Global Multistakeholder Meeting on Internet Governance has been scheduled for 23 and 24 April 2014, in São Paulo, and will be organized in a partnership between CGI.br and international entities representing the different sectors involved with Internet governance. This is aimed at providing a platform for government leaders and representatives from different global sectors to discuss proposals about Internet governance and development.

The ICANN 48 also saw the award of the first Leadership Award whose first recipient was Lesley Cowley, the CEO of the U.K. registry Nominet. The Korea Internet and Security Agency (KISA) and ICANN announced that they had signed a Memorandum of Understanding. Under the framework of the MOU, ICANN and KISA will closely collaborate on engagement efforts in Korea and implement a pilot project to promote language localization efforts in the region.