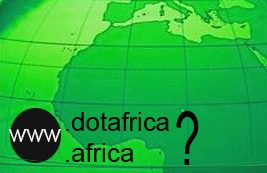 Good Bye .DOTAFRICA A significant landmark Victory in the battle for .Africa gTLD

The confirmation of this patiently-awaited development was communicated to DCA Trust by the ICANN new gTLD Customer Services Team on the eve of the ICANN-45 International Meeting in Toronto, Ontario, Canada.

The ICANN approval of the Change Request for the .Africa string name is an official affirmation that DCA Trust indeed applied for the .Africa string name, and not ‘(dot).Africa’ or ‘.DotAfrica’ or ‘DotDotAfrica’ as was erroneously reported by certain sections of the media and by some mischief-makers who wanted to disparage DCA’s new gTLD application.

Since the ICANN Reveal Day on 13th June 2012, DotConnectAfrica Trust has always insisted, including issuing a public clarification that its new gTLD Application submitted to ICANN is for the ‘Africa’ geographic name which references an exact 6-character ASCII string.

The ICANN approval is a strong public vindication of DCA’s spirited defense of the .Africa string name that it applied for, thereby making any string confusion or a contentious objection procedure on grounds of string similarity completely unnecessary and unwarranted.

Furthermore, ICANN’s official confirmation of DCA’s application for .Africa gTLD string name will now put an end to the apparent string confusion issue that DCA’s competitor and opponents tried to capitalize upon to insist that there is only one applicant for .Africa, even though it has always been obvious to the global ICANN Community that there are indeed two competing applications for .Africa submitted to ICANN during this new gTLD application round – one by DotConnectAfrica Trust and the other by UniForum ZA Central Registry. ICANN’s approval of the Change Request made by DCA Trust would help to remove any doubt and uncertainty regarding the applicants for .Africa, and the string name they applied-for.

DCA Trust would like to applaud the patience of the ICANN new gTLD Customer Services Team who were quite diligent and efficacious in dutifully responding to the Change Request made by DCA Trust in accordance with new gTLD program guidelines and ICANN policies and other criteria regarding how Change Requests from applicants were to be handled.

DCA Trust has always been a strong supporter of the work of ICANN, and in its procedures and processes, and remains confident in utilizing the mechanisms within the new gTLD program to continue to make its case and justify why it should be awarded the ICANN mandate to operate the .Africa New  gTLD registry.

The approval of the Change Request for DCA’s .Africa gTLD name string has bolstered DCA’s enduring faith in the entire new gTLD program and this has further reinforced our optimistic expectations of passing the Initial Evaluation stage successfully; simply on the strength of our compelling application that is pivoted on putting the interest of users and registrants first.

Our .Africa application contains robust financial, technical, operational and legal measures for forward-preparedness that have been included to provide ample protections against risk for users and registrants. In addition to the fairly sizable financial guarantees supplied to guard against registry business failure, the proposed standard domain name pricing for registrations and renewals have been set at a very affordable rate to ensure superb cost-benefits for all prospective users of the .Africa new gTLD.

DCA Trust counts this important development as a significant landmark victory in the battle for .Africa gTLD and would like to express utmost thankfulness to all its global supporters and the growing number of African governments that have endorsed it as an applicant

for the .Africa generic Top-Level Domain.

Having done the necessary spadework to fulfill pertinent new gTLD program criteria in a straight-forward manner, DCA Trust believes that by holding on to the cardinal principles of truth and justice, its application for the .Africa gTLD would be successfully approved by ICANN.

Goodbye .DotAfrica and a big welcome to .Africa!