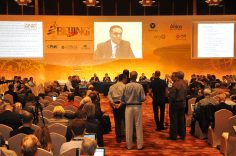 DotConnectAfrica Participates at the ICANN 46 International Meeting in Beijing, China

DCA’s application for .Africa new gTLD received an ICANN GAC Policy Advice Objection which the organization hopes to resolve by following the due process provisions within the ICANN new gTLD Program.

Beijing, is the capital of the People’s Republic of China and one of the most populous cities in the world, with a population of 19,612,368 as of 2010. Beijing is China’s second largest city by urban population after Shanghai and is the country’s political, cultural, and educational center, and home to the headquarters for most of China’s largest state-owned companies and is also a major transportation hub.

The ICANN 46th meeting broke the record and was rated as the largest meeting ever with more than 2,100 people showing up against 1,821 who attended the Prague meeting in the Czech Republic in June 2012. ICANN President and Chief Executive Officer Fadi Chehadé also announced that the organization would open its first new global engagement office in Beijing. “Engagement with China is not merely an option, we simply must engage at every level or we will lose our legitimacy,” said Chehadé. “This is part of our effort to embrace the world.”

The announcement of ICANN’s expanding presence in China was heralded by Chinese Internet leaders. “Our Internet future will now be brilliant,” said Madam Hu Qiheng, the President of the Internet Society of China. “This is a bridge for ICANN and China and it will lead to greater expansion of Internet development.” ICANN Board Chair Dr. Stephen Crocker pointed out the dramatic growth of Internet users in China in the past decade.  “In the past decade, Internet use has increased ten fold,” said Crocker. “There are now 564 million Internet users in China and that is expected to climb sharply in the future.”

The ICANN 46 comes at a time when the governmental representatives on the Governmental Advisory Committee (GAC) are giving their policy advice to the ICANN Board on different  applications.  DCA’s application for .Africa new gTLD received an ICANN GAC Policy Advice Objection which the organization hopes to resolve by following the due process provisions within the ICANN new gTLD Program.

Mr. Shang Bing, Vice Minister of the Chinese Ministry of Industry and Information, has also delivered a speech at the opening session (http://www.cctld.ru/en/news/digest/detail.php?ID=4458), saying that “the Internet has become key infrastructure for development in information age” He continued to say that “and we will improve all the monitoring, the security, the user rights and fair, honest market environment”

. “We are confident that the Beijing meeting will be an impressive one, and a milestone in the development of the Chinese community and Internet.” added Ms. Limei Liu from China Organizational Name Administration Center (CONAC (http://www.conac.cn/english/home/news/201210/t20121026_18…)).

Ms. Bekele remains confident that the processing of the .Africa new gTLD application that DotConnectAfrica has submitted would  continue and successfully  move  towards delegation  in the not too distant future.  According to the DCA Trust Executive Director/CEO: “we are following a  structured process, and the GAC Policy Advice is by no means the end of the matter.”

ICANN has also got a head way due to its involvement at a closer level in decentralizing and globalizing its programs and delegates hope that these efforts will go a long way in making ICANN understood all over the world and especially African governments .

DotConnectAfrica Project Support Engineer Mr. Gideon Rop also had an opportunity to speak as a panelist for the NPOC Beijing Meeting – Role of Youth in the DNS, where he explained that the role of the youth was increasingly becoming an important facet in Internet governance.  He pointed out that apart from the traditional ICT duties that required trained skills, the youth also have an important role in the utilization of Social Media networks which is now a niche platform for content development, sourcing, advocacy and education.

The ICANN Beijing was a successful meeting in many ways and DotConnectAfrica hopes that these developments will further consolidate Internet development and advancement.

Hey, You Have Come a Long Way