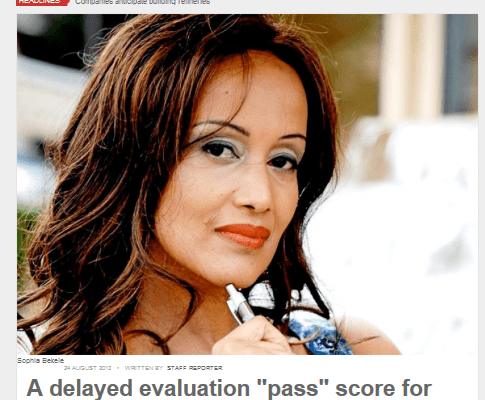 DotConnectAfrica Refuses to Withdraw its Application for .Africa before Accountability Hearing

In a summary analysis, The Reporter Daily provided an upto date investigative report on the status of the dotafrica (.africa) project and the complicated issues that DCA has been subjected to in its application regarding Governmental Support.
PRLog (Press Release) – Sep. 5, 2013 – A delayed evaluation “pass” score for .Africa competition, as  DotConnectAfrica refuses to withdraw before Accountability Hearing

Sophia Bekele, whose Company, DotConnectAfrica (DCA) Trust was one of the contenders for the .africa gTLD web address name, said: “A lot of progress has been registered during the past six years, especially managing a global promotional campaign to raise awareness about .africa and new gTLDs and the work of ICANN in general; and to also explain to people and different organizations how Africa and Africans would benefit from the introduction of the new gTLD”.  She also said, “a lot of challenges in terms of effort, resources, and communicating the .africa message to enable realignment of fixed mind-sets”, and added that her company was overcoming these various challenges.

Her Company’s latest response to the ICANN Reconsideration Committee, says “We have no intention of withdrawing our application against the backdrop that we rightfully believe that the Board decision is injudicious, very wrong and injurious to our application and to our organizational aspirations. ”

And, some industry watchers speculate on the same faith saying,  “But if the company is nutty enough to try its hand at an IRP, which could quite easily set it back a few million dollars in legal fees, the story might not be over yet.” And it appears the journey of a ‘.africa’ registry may take longer than anticipated based on the issues that have dogged the process since its being introduced.

The new round of internet suffixes known as the ‘gTLD’ program approved in the 41st ICANN meeting Singapore is managed solely by Internet Corporation for Assigned Names and Numbers (ICANN), where 1930 applications were forwarded and 17 applications came from Africa.  The ‘.africa’ domain name received 2 applications from DotConnectAfrica Registry, based in Kenya and Uniforum ZACR from South Africa.

DotConnectAfrica got the credit for propelling the idea worldwide making .africa among the most anticipated domain. From our research after the .africa was introduced, competition set in but unfortunately also came personal interests that have convoluted and infiltrated the entire application and endorsement process.

In 2009, DotConnectAfrica was awarded an endorsement by Africa Union Commission among other organizations.  The same endorsement was said to have been withdrawn, and according to the company, no proper withdrawal letter was written from the AUC.

The company claims that this push for the AU to appoint a new bidder is said to have been managed by special interest groups that issued an opaque RFP process that was contrary to the ICANN bidding process.  The company also added that no bidding process actually took place and AU appointed UniForum unilaterally, despite AU’s press release “through an open and transparent tender process, has appointed UniForum SA (the .ZA Central Registry) to be the registry provider for the dotAfrica TLD”.

This same attempt had previously resulted in a botched request to ICANN to reserve the .africa and relate names for the African Union.   ICANN denied the request later saying “ICANN is not able to take actions that would go outside of the community-established and documented guideline of the program to provide the special treatment you have requested. ICANN does wish to explain, however that protections exist that will allow the African Union and its member states to play a prominent role in determining the outcome of any application for these top-level domain name strings.”

The company also said that, the bid to block DCA continued with the individuals who midwifed the endorsement withdrawal, which then backed a push for countries to send early warnings against DCA’s application.  The similarity in the early warnings betrays the intense concealed lobbying, which proceeded to a full Governmental Committee warning on the DCA application early this year at the Beijing ICANN meeting, the company claims.

It is also understood that DCA had raised enough notice to ICANN in several letters on the possibility of sabotage on its bid due to strong evidence of Conflict of Interest by members of the ICANN board who make a decision on its submitted applications.  While most ICANN Board members who have conflicts with the industry have reportedly recused themselves from decision making, the presence of Board Members from South Africa and Australia, who also sit on the new gTLD decision making committee, reportedly have arm’s length relationship with UniForum are  seen as the influence in sustaining a faulty UniForum application to pass the application process unscathed.

The latest meeting held in South Africa also increased further controversy just like its ICANN Dakar meeting in 2012. This is evidenced by how it comes to a surprise when DCA received an “incomplete”

result just before the Durban SA meeting while a “pass” was granted for its South African competition.

Though DCA had passed all panels, to include technical, financial, and operations, their application was stopped by the new gTLD decision committee before the Geographic Review Panel, who is suppose to independently make the decision on endorsement could complete their work.

Given this panel would give a “pass” for DCA based on submitted documentation, it would have been an obvious contradiction and embarrassment to the unverified objection the African Governments, who try and disqualify DCA for its lack of governmental support, and which will also appear contrary to the decision of the new gTLD Committee.

More to this contradiction is that the Applicant Guide Book, states explicitly, “an application is entitled to pass through all the panels before it is dismissed or withdrawn by the applicant.” Despite, an official notification to DCA from ICANN received via its customer service portal on 3rd July contained the following statement:

“This is a notification to inform you that the status of your application .AFRICA…The status of “Not Approved” will be reflected on the Application Status page of the new gTLD microsite: