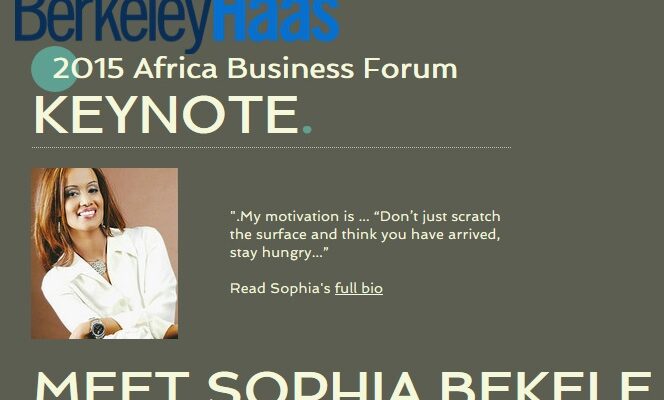 May 7, 2015 – BERKELEY, California.  The organizers of the 2015 Africa Business Forum at the Haas School of Business in the University of California, Berkeley invited the Founder/CEO of DotConnectAfrica Group & CBS International, Founder of Yes2dotAfrica Campaign to present a keynote speech on the Theme “Africa: The Next Frontier for Mobile Technology”.

The audience and supporters of the forum included Students, Faculty, Alumni, other distinguished guests as well as the Dean of Haas School of Business Rich Lyons, who gave an opening remark.

The Business forum which was held on 2nd May, 2015 focused on the rapid adoption of mobile technology in Africa which has given birth to new business models and innovative solutions to previously unsolvable problems, while trying to find answers to the question: What will the continent look like in 10 years? How will the adoption of the web transform how business is done?

“Mobile technology is the future of the internet, all services and solutions gravitate towards the accessible yet disruptive personal touch of the button…”   –Sophia Bekele

Bekele started by thanking the organizers and members of faculty of UC HAAS School of Business  for her invite, obviously followers of our work” she said, noting also that her invitation came via twitter, indicating the power of new media in influencing the future of the internet”.

She recalled DCA’s 2015 New Year’s newsletter titled, “The year of Creative Disruption”, where she made several predictions such as, smart phones to read minds; cognitive computing; blackphone rollout, digital wearables, Streaming, Cloud Security.   This was noted as an indication of the power of the mobile and technology as tools to define the future of business operations since the “it is estimated that more than 40% of adults in Africa have a cellphone and the number grows every year”, she informed the audience.

Sending her congratulations on their new initiative,  she reminded the students in the audience of their privileges of getting top grade education from Haas School of Business, being one of the best rated Business Schools as well as their proximity to San Francisco and Silicon Valley, a famed hotbed of major innovative businesses like Google and Facebook, no doubt, presents a great motivation for the numerous possibilities that exist in innovating, and especially thinking about the enormous potential that is untapped in the African Continent.

Bekele shared her various companies notable experiences and achievements, and conveyed, “all I can say is myself and my companies are very proud to be part of the African history of building the information society and the super highway (called the internet), capacity building, policy development, and empowerment of youth and women in Africa, for that matter, and we are still there.”  But it all came about because we PARTICIPATED.

Bekele urged the audience to remain alert on the new technological advancements telling them to remain focused on innovation and conveyed that “the future of what I call “Digital Opportunities” is defined by Mobile technologies.

Internet and Mobile seems to be the platform through which everything runs upon and this means that whatever project, innovative idea or business venture that is being crafted, it must be modeled in a working mechanism that is based on the internet, YET mobile technology.”

She talked of recent announcement by Google on algorithm changes to favor the websites that are mobile friendly.

“How many have heard the recent news in Google changing its algorithm for search engines to mobile?..… I knew of it because my people within the 24 hrs of hearing the announcement changed all our digital sites to comply with this new algorithm and sent me the list.  This is a case of survival of the fetus. Sink or Swim, or Go Mobile or nowhere.”

In an inspirational closing,  Bekele advised,  “Africa is the land of digital opportunity. Africa’s Digital Opportunity is NOW – PARTICIPATE”

“From the perspective of Entrepreneurship and or any initiative you want to start, particularly in Africa think digital and go digital.  And when the going gets tough, hustle harder… if you fall, stand up again and again. That is our history and this is how we build Africa”, she asserted.

“At an individual level, let no one define you but you” she continued “because that is how you leave your personal legacy.  Also, Believe in yourself – just because the majority says they are RIGHT does not mean you (on person) is WRONG. But you already know this in Berkeley”,  she concluded with a high tone.

In sharing with DCA press the audiences reaction to her talk, Sophia said “I was very pleased to hear my call to PARTICIPATE made an impact to many participants.  A young Congolese who is a developer at Apple came up to me and said

“You have changed my views in ONE word Sophia, just ONE word, that is ‘PARTICIPATE” -Luc Walter iBata, developer at apple

which I noticed he later tweeted saying ‘I want to participate’.

You never know what impact your message has until someone tells you exactly like that.  I was stoked!

Bekele also engaged in a Q & A  session after her talk, with the distinguished Berkeley Faculty Member and renown Scientists who has a long standing work in Africa on transformation technologies, Dr.  Shashi Buluswar, as he asked her views on various topics, including which African countries are best to do business, on relations of Africa with China and the West, as well as why MPesa seems to get most attention than most in terms of mobile technology.

Audience also posed various questions relevant to Africa and its development,  concerns over international and local competition and monopolies and how to navigate the African  business structure.

The event was SOLD OUT two days prior to date of opening, demonstrating interest in Africa and the topic.  Indeed it turned out to be successful with various dynamic speakers and panelists with exceptional debate on the issues of the Next Frontier is for Africa, and included those companies who are interested in investing,  as well as developing mobile solution for the African markets.

You may view the full program here.

The full keynote for Bekele is available at DCA’s website.