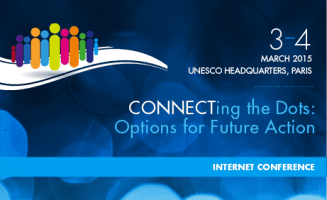 The objective of the conference was to discuss the first draft of the Comprehensive Study on Internet-related issues as part of UNESCO’s response in support of the decision taken by its 195 Member States, to examine current and emerging inter-related trends, challenges and opportunities around access to information and knowledge, freedom of expression, privacy, and ethical dimensions of the information society.

Four Keystones namely Access to information and knowledge, Freedom of Expression, Privacy, and Ethics on a Global Internet; were identified under UNESCO’s mandate, which is to promote international cooperation in education, the sciences, culture, communication and information, UNESCO’s contribution is essential.  They shed new light on a people-centered perspective of Internet, including issues of empowerment and rights online.

“it did an excellent job particularly in mapping the UNESCO mandate to the four KeyStones identified under Rights to Access; Freedom of Expression; Privacy and Ethics. This clarity over mandate becomes very important as more Intergovernmental Organizations get involved in debates over Internet. I think most of us netparticipants know that, as many of us here are part of the IG political theater”.

In responding to audiences questions and concerns over the “Access Divide”,  Bekele stressed on the importance of setting legislation that would cut down the unnecessary restrictions as well as creating subsidies for catalyzing connectivity for access as key.  She also  emphasized narrowing the divide through  eliminating barriers to entry and increasing competition by breaking monopolies and special interests.

Bekele’s opening statement on “Access Divide” is available here, along with recommendation to further include in the final study [PDF] (https://old.dotconnectafrica.org/wp-content/uploads/2015/03/St…)

With overwhelming agreement, a multi-stakeholder gathering of some 400 participants at UNESCO headquarters adopted a non-binding Outcome Document of the UNESCO CONNECTing the Dots Conference and underscored the significance of the Internet for human progress and its role in fostering inclusive Knowledge Societies.

Thanking the participants after the adoption of the Outcome Document, the Deputy Director General of UNESCO Mr. Getachew Engida  in his closing remarks said: “The Internet and all new information and communication must be at the heart of the post-2015 agenda – as a transformational force and a foundation for building the knowledge societies we need.” He continued, “This is the importance of R.O.A.M principles for inspiring a human rights-based, open Internet that is accessible to all and characterized by multi-stakeholder participation.”

DCA is a thought leader in connecting the dots in Africa and the global internet community with its sustained contribution in the dialogs and debates on internet governance, cyber security, among others. The UNESCO.s event theme under “CONNECTing the Dots: Options for Future Action synergizes well with DCA’s sustained themes to connect the dots in Africa and globally using the online platform. DotConnectAfrica brings Africa to the world and as it brings the World to Africa.

UNESCO’s call for Comments
DotConnectAfrica was among the various respondents who also commented on UNESCO’s launch of a global questionnaire during July-December 2014 to collect inputs and research from a range of stakeholders on internet study, which provide diverse and substantial inputs in the areas of access to information and knowledge, freedom of expression, privacy, and ethical dimensions of the information society as well as options for future actions. DotConnectAfrica’s comments to the UNESCO’s call for comments can be found here (https://old.dotconnectafrica.org/communications/unesco/)