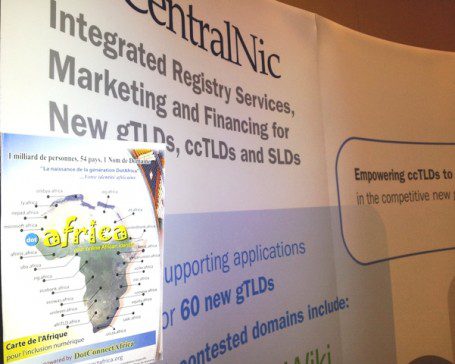 index.php/component/rseventspro/event/1) meeting held at the UNECA Conference Center in Addis Ababa, Ethiopia from 6-8 March 2013, where it played a part among other African organizations like African IGF, AfriNIC, AFTLD, ISOC Africa, and the ATU and ITU.

ICANN participated (http://onlinedomain.com/2013/02/09/news/icann-will-partic…) in this meeting that saw regional leaders from government, the private sector and civil society.  Some of the attendees included the Ugandan and Burundian ICT ministers. The foreign Registry firms that attended the conference were AFNIC the French Registry and the UK based CentralNic, who has partnered with DCA registry services to set up an African Registry based in Nairobi, Kenya.

This  open public meeting was are aimed at fostering engagement among Internet organizations and all stakeholder groups in the African world and therefore offered the opportunity to share best practices of successful multi-stakeholder models and discuss means to enhance effective participation in global Internet Governance.

DCA Registry Services delegates included Chief Executive officer Ms. Bekele, who had an opportunity as a panelist to relay part of how the African DNS business can achieve its goals.  Ms. Bekele specifically identified the fact that the clear responsibilities must be defined in the multi-stakeholder model in order to ensure thriving of the DNS business in the new dispensation especially now that new gTLD’s are entering the market.

While speaking implementing the Africa strategy, Ms. Bekele was also able to further present and elaborate on The Internet Business Council for Africa (IBCA), an initiative that was unveiled during ICANN Toronto public forum, a consortium that will seek to work purely with the private sector in energizing ICT with business, and setting up means for African businesses to work with the global entities and thus improve their stakes and reach universally.

In his remarks the ICANN CEO emphasized the openness that ICANN wants to have with the global market and especially the African sector.  He says that “partnering together all of us is central to our success”. He also pointed out that the world is waiting for Africa to rise, and that it’s our responsibility to transfer ICANN to the world.   The CEO also emphasized the need to synchronize the work and policies of African initiatives with the global ICANN program for any initiatives to have legitimacy, which mirrors the core of DCA’s voice and its own initiatives at ICANN.

In intervention, Mr. Gideon Rop  the Project Support engineer for DCA Registry Services while speaking about the DNS business noted the Registry Business challenges/opportunities that are facing the African market and the need to put action into the strategies that have been put on paper that will focus on improving the DNS services so that the domain name business can be lucrative and attractive, such include improvement of the DNSSEC, IPV6 implementation and Especially the EPP services to make it easier for the registrants.   Mr. Rop also elaborated on the involvement of youth at ICANN would be strategic in increasing its activity in the African continent. This is in line with DCA’s trust program which has offered to use resources from the registry to empower the youth.

The presentation by DCA Registry services highlighted some of the problems that are currently facing the DNS market in Africa, including the lack of sound registry back end solutions, no advantageous pricing promotion and marketing, lack of favorable and flexible registration policies professional management.  There also is a missing registry/registrar/reseller model that would allow for competition and innovation in the DNS business and the ICANN position in the African context, which ICANN is making efforts to increase African presence as promised to close gap.

Voices from the ICANN Board members including Mike Silber and Sébastien Bachollet who were present, affirmed the various business model that can be adapted by ccTLDs and gTLDs and that there is no one model that should be considered as successful.

DCA registry services and CentralNic who was represented by Mr. Mohammed AL-Ammouri, Business Development Manager, (Middle East Africa) also lauded the opportunity to meet the African ccTLD’s that were present and understand their views, challenges and the registry models they have adopted.  DCA Registry Services plans to provide the required technology transfer for African ccTLDs through its partner CentralNic.  The delegation noted the urgent need for the improvement of services to make the market viable and profitable and these findings strengthen its promise to work with the ccTLD’s.

There was also some room to iron out objections that were purportedly placed on DCA application by ccTLD or other Governmental representatives present, said Ms. Bekele in her statement to this press release.

Overall this was a successful meeting for DotConnectAfrica and its partners.
DCA registry services looks forward to participating in more events that are key in improving the African DNS market.  DCA thanks the organizers for their support and for participation.