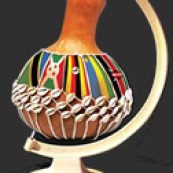 The annual East African Internet Governance Forum (EAIGF) event was held recently at the Jacaranda Hotel Nairobi. It was preceded by the Kenya IGF that was held at the same venue a fortnight ago. The meeting was attended by many delegates from East Africa sub-region and addressed by the Permanent Secretary of the Ministry of Information and Communication of Kenya, Mr. Bitange Ndemo who addressed issues concerning Internet connectivity within the East Africa region as well as the dire need for the development of Internet Content that is specific for Africa, citing that it was the only way Africa would be able to redirect the online traffic to Africa as opposed to the current situation where almost 70% of Internet content accessed is external.

This concept of African content was strongly supported by the DotConnectAfrica delegation who were roundly appreciated by the East Africa IGF Delegates for being the organization that has really put Africa on the Map both in the issues concerning the DotAfrica top level domain that it has campaigned well for over six years as well as the constant and incessant education of the African netizentry through its press releases and industry updates.

It may be recalled that DotAfrica as a project idea was largely abandoned at ICANN for nearly five years before DCA re-started the project with renewed impetus and momentum, and re-introduced it to the African inter-governmental organizations such as the AU and UNECA for their support, to ensure that Africa does not lose this important generic top-level domain. DotAfrica today remains the re-energized effort commenced by DCA which was underpinned by a strong communications strategy to sensitize various African and global publics about the DotAfrica initiative. Many people always look forward to DCA’s important commentaries and Op-Ed pieces that are highly relevant to global Internet governance.

On matters pertaining to the .Africa Domain, Gedion Rop, DCA’s Representative noted that “DotConnectAfrica had an opportunity to clarify and defend its position as a strong and compelling applicant for the DotAfrica (.africa) top level domain” saying that “no organization was the chosen front runner” since ICANN has yet to evaluate all complete applications that have been submitted by applicants. This was to correct the misleading reports that Uniforum group, who were also present at the meeting, had firmly secured the dotAfrica gTLD.

Mr. Gedion Rop dismissed such wrong reports as an exercise in mass media manipulation with a view to misinforming the public, which is quite unethical.   DCA also sought to emphasize that the geographic string name applied for was indeed .Africa gTLD as clarified in its post reveal Press release. Contrary to the unfounded allegations that DCA did not apply for .AFRICA (dotAfrica) string, DotConnectAfrica remains a strong contender for the DotAfrica string name and actually stands the best chance of being awarded the mandate to operate the .AFRICA gTLD registry since it has adhered to, and respected all the guidelines of the new gTLD programme, in addition to accepting ICANN’s oversight of the entire process, unlike UniForum which might be penalized for wrongly attributing the rights of DotAfrica gTLD to the AU instead of ICANN in direct contravention of the new gTLD programme guidelines.

Even though the EAIGF was not well attended, the event provided a good opportunity for the participants to discuss key issues that included Africa’s position on the ITR’s and resolutions submitted to the ITU in order to weigh behind changes that need to be made on the resolutions. Efforts were also made to see how Africa’s position could be well articulated given that Africa is becoming a key player and stakeholder in global telecommunications. Countries that emerged to have a position include Rwanda.

Among other key discussions was Cyber-Security which is becoming an important and engaging issue of great concern within the East African Community. Given that CyberCrime is now on the increase, several countries have taken preliminary steps to curb this development thus forming CIRTs (Cyber Incidence and Emergency Response Teams). DCA was happy to note that most East African states had attained this and have even gone further to form the East African Consortium that would give a unified position.

Issues of Broadband connectivity were also taken as important in enabling data and content development by aiming to reduce the call termination rates by improving international connectivity via the Fiber optic trunk that would serve all the countries across the East African sub-region.

Greater youth involvement was recognized as a key development being that the first ever Rwandan IGF was held in the native language with the aim of including the rural community in the discussions. The youth representatives had asked pertinent questions regarding how the youth in the rural areas could properly contribute and brought into the mainstream of Internet development. We think that this is a good way to preserve culture and extend the frontiers of African languages; imagine saying the word Internet governance in your local language! Interesting, isn’t it?   DCA, being a proud founder of the generation.africa will always support such initiatives.