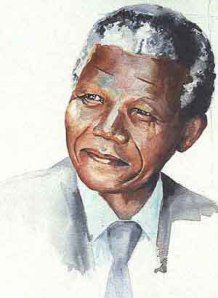 DotConnectAfrica Trust takes this opportunity to celebrate and honor the Giant Iconic Leader of Africa: Courageous, Selfless and Noble.

The children of Africa indeed, the entire World mourn and honor the man who truly exemplified the need for hard work and sacrifice even when times were very hard, the comforting proof that good triumphs over evil. That Love wins over Hate. That Togetherness wins over Division.

Mandela spent 27 years in prison on Robben Island, fighting over stereotypes and seeking to restore equality in humanity.  Africa celebrates the lessons of a man who kept his word. Governed for one term and stepped down when his nation needed him most just to ensure that his promise was sacrosanct.
His inspiring words continue to remain in our hearts “I am fundamentally an optimist. Whether that comes from nature or nurture, I cannot say. Part of being optimistic is keeping one’s head pointed toward the sun, one’s feet moving forward. There were many dark moments when my faith in humanity was sorely tested, but I would not and could not give myself up to despair. That way lays defeat and death.” – Long Walk to Freedom: The Autobiography of Nelson Mandela

Mandela fought for justice, freedom, democracy and equality. He sacrificed to ensure that all voices are audible; he believed in change that affects all levels of living “As I have said, the first thing is to be honest with yourself. You can never have an impact on society if you have not changed yourself… Great peacemakers are all people of integrity, of honesty, but humility.” – Nelson Mandela .

DotConnectAfrica is inspired by such sacrifices to see that Africa can promote justice, transparency and fairness in all facets of its economy.

DotConnectAfrica feels one in spirit with Mandela. We began a campaign over six years ago that will help bridge the ‘Digital Divide’  whistlt inspiring present and future generations of Africans.  We have learnt that inspiring the youth and giving them a chance to initiate and realize their dreams creates the collective vision and future that we seek for Africa, the continent of opportunities the land that gave  Mandela to the world.

Even as we bid farewell to Africa’s Icon, we will always remember to keep working smart and hard and diligently till we deliver our pledges to the continent.  We see every challenge that we struggle to overcome as an opportunity; a test of mettle and determination that serves to make us stronger, more unrelenting and more committed.
We shall rise and rise every time because our passion for the continent beats the challenges.

“When the history of our times is written, will we be remembered as the generation that turned our backs in a moment of global crisis or will it be recorded that we did the right thing?” – Nelson Mandela in Tromso, Norway, 2005

Africa is rising, as we celebrate Nelson Mandela, let us keep his legacy alive by following in his footsteps and example.

Your Sincerely,
For: DotConnectAfrica Trust