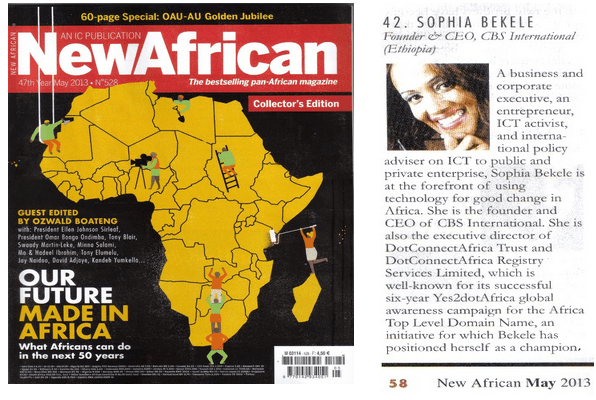 http://prlog.org/12143097 March 20, 2013, Mauritius, Port-Louis, Sophia Bekele, Executive Director of DotConnectAfrica Trust (DCA Trust), has been named as one of the ’50 African Trailblazers under 50‘, by the influential New African magazine UK, a member of the IC Publications group. New African is a well known publication that is in the vanguard of contemporary Pan-Africanist projection and thinking. www.newafricanmagazine.com

The special “Collector’s Edition” of New African for May 2013 has been put together by the editors of the magazine to coincide with the 50th anniversary celebrations of the founding of the OAU-AU, the inter-governmental organization that draws its membership from the African countries and will take place in Addis Ababa, Ethiopia, the headquarters of the African Union.

The 50 African Trailblazers under 50 list also includes many important luminaries (The list may also be found here). To draw attention to the fact that the African Diaspora have a big role to play’ and the current American President is of African descent, th

e list also includes Mr. Barack Obama, the 44th President of the United States of America, and cited. “Whichever side of the fence you are on, Obama is a formidable example of someone whose drive, passion and remarkable intellect have enabled him to attain the highest political post taking on the American establishment and shattering all stereotypes on the way”.

In reacting to the singular honor and recognition of being included in such exalted company, Sophia Bekele said she felt greatly humbled by the acknowledgement of her contributions by New African magazine especially within the context of the hope and achievement that is expected from an emerging class of the new Africans that are taking charge of Africa’s future. The NewAfrican citation for Sophia Bekele reads:

“A business and corporate executive, an entrepreneur, ICT activist, and international policy adviser on ICT to public and private enterprise, Sophia Bekele is at the forefront of using technology for good change in Africa. She is the founder and CEO of CBS International. She is also the executive director of DotConnectAfrica Trust and DotConnectAfrica Registry Services Limited, which is well-known for its successful six-year Yes2dotAfrica global awareness campaign for the Africa Top Level Domain Name, an initiative for which Bekele has positioned herself as a champion.”

When asked to comment on her journey so far as a recognized African Trailblazer, Sophia Bekele said:  “During my first stint on the ICANN gNSO Council I saw that the .Africa project wa

s not implemented, and questioned why Africa was not allowed to have its own domain name.

I asked a few people that I met at ICANN, and discovered that there was no reason to justify the non-implementation of .Africa against the backdrop that Europe already had the .eu domain name, and Asia had .asia.  I thought Africa should also have its own .Africa domain name.
My vision was simple: initiate the project, build a viable governance structure for it; involve key stake-holders to support it, then promote the domain name globally in order to create awareness and support.
I decided to follow this plan of action, and started approaching organizations such as the AUC and the UNECA, the Corporate Council for Africa (CCA), various diplomatic organizations and embassies, and different African country governments. We received key endorsements from these, and many African governments were also starting to endorse us.”

In continuing, Sophia said: “As our Yes2DotAfrica Campaign picked up steam, we created the DCA Trust and defined the charitable objects for it, which is to “(a) for the advancement of education in information technology to the African society; and (b) in connection with (a) to provide the African society with a continental Internet domain name to have access to Internet services for the people of Africa as a purpose beneficial to the public in general.“

Sophia also cited her other important project for Africa, an earlier collaboration with the African Union and believes that she has always been a partner of the AU:

In early 2000, my companies (CBS/SbCnet) built the first fibre optic campus area network that was implemented at the headquarters of the Organization for African Unity, OAU-AU.

The project was highly recommended by Senior AU and UN official project representatatives like Ambassador Sam Ibok, and the Darfur peace mediator, whose recommendation noted that:

“the system as deployed and successfully commissioned, consists of a campus-based inter-network implemented by using a fiber-optic backbone that links the various buildings within the OAU General Secretariat complex.  The system also features Intranet/Internet system” -African Union

and Ambassador Melvin Chaloba, who was the Chief Technical Adviser to the UNDP, and UNOPS Deputy Director in the UNDP-funded capacity building project for the OAU, also the former Sierra Leonean Ambassador to Ethiopia and the African Union, who gave recommendation of the work performed for the then OAU by Sophia Bekele’s organizations and cited that:

“the network was successfully tested and commissioned and is fully operational. An acceptance certificate of performance was accordingly issued to CBS for satisfactory completion of the project.” –UNDP/UNOPS

Based on this earlier track record of project cooperation with the African Union, Sophia said she felt encouraged to go back to the African political organization to obtain their support and endorsement for .Africa new gTLD name.

In her own words: “I have a successful track record of collaborating with the African Union as a Pan-African institution and I remain confident that any controversy surrounding .Africa will be resolved and you will soon see me going back to collaborate again with the African Union on the .Africa project. We are all Africans and have to be mutually supportive of one another, cooperate and join hands together to serve our beloved continent so that Africa and its people would benefit.  We are all responsible for Africa’s future to ensure that our present actions would guarantee the realization of the vision espoused in the thinking of earlier Pan-Africanists.”

DotConnectAfrica Trust would like to congratulate Ms. Sophia Bekele as a trailblazer, and all those that have been named on the  50 Africans under 50 list by New African magazine, and feels honored to be involved in contributing its quota as an independent applicant for the .Africa new gTLD that would ensure positive branding for the African continent and the harnessing of technological and socio-economic opportunities represented by the global Internet expansion as  something that would benefit all Africans under the framework of .Africa.

DCA Trust would also like to extend its congratulations and highest considerations to the African Union Commission and its member states on the occasion of the 50th anniversary celebration to make the establishment of the Organization of African Unity.

Pick your copy at your nearest stand, it is a “Collector’s Edition”!