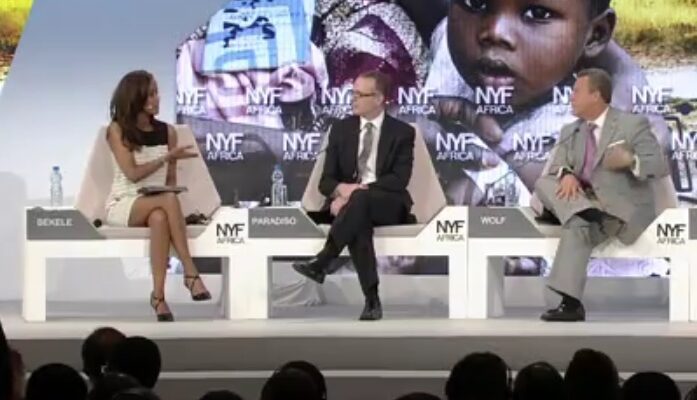 The forum focused on transformation:

unlocking the competitiveness of the African economy through building value chains around the transformation of the continent’s natural resources, including its human capital. In knowledge economies, such as those in the western world, education is the foundation of economic competitiveness and global prosperity – and is inseparable from the development of human capital.

The forum the New York Forum AFRICA is organized under the high patronage of H.E. President Ali Bongo Ondimba in collaboration with the Government of Gabon and Richard Attias & Associates – part of WPP group.

Sophia Bekele was among the delegates who spoke at the conference as an authority in  Innovation, Business and internet synergy, Governance and US-Africa relations. Speaking at the conference, as a panelist ON TRANSFORMING CONNECTIVITY INTO DIGITAL INNOVATION, Bekele pointed out that due the exponential growth of mobiles and lack of infrastructure in the rural areas, a rural development strategy using mobiles should be of national importance. She also stressed “This national strategy should also include Mainstreaming Women in the ICT sector”.  Bekele noted that there will be a need to increase collaboration to reduce the cost of online access, and provide avenue for new markets in IT that will leverage on content creation, which goes into increasing the use of mobile phones, social media and apps. Bekele added that Africa’s Generation-Y is using ICT to create opportunities and build businesses but this needs to be marched with training on entrepreneurship, and an understanding on how to monetize the internet for income generation.

An assessment from the World Bank revealed that human capital contributes more than 60 per cent towards economic development, as compared to physical infrastructure (around 15 per cent) and natural resources (around 20 per cent).  African leaders face challenges from numerous fronts: how to harness economic growth, stimulate job creation, increase political stability, and handle the transition to democratic systems. How will they navigate change on the most rapidly-changing continent in the world ? In this discussion between heads of state and political and economic leaders, the panel put forward concrete recommendations for Africa’s future.

While moderating a conversation on US-Africa relations with Washington’s high level panel, notably Mr. Robert Wolf CEO and Founder, 32 Advisors, former CEO of UBS Americas, and a three time economic advisor to President Obama and Mr. Dante Paradiso, Charge de Affair for US Embassy Gabon, Bekele raised key questions and challenges on the current initiatives of President Obama on Power Africa, Trade Africa, and asking if China’s USD 200B trading position with Africa has neutralized the US.

She advanced questions and comments on how Barrack Obama’s Young Leaders Program ought to mirror the past peace corp initiative, in that USA also needs to know more and be ‘hands on’ about Africa, and Paradiso discussed in detail on HOW AFRICA SEES THE UNITED STATES and vice versa.

This important US-Africa Summit happens as the White House prepares to host the first U.S.-Africa Leaders Summit in Washington, DC on August 5 and 6, 2014. President Obama looks forward to welcoming leaders from across the African continent to the Nation’s Capital to further strengthen ties with one of the world’s most dynamic and fastest-growing regions.  The Summit will build on the progress made since the President’s trip to Africa last summer, advance the Administration’s focus on trade and investment in Africa, and highlight America’s commitment to Africa’s security, its democratic development, and its people.