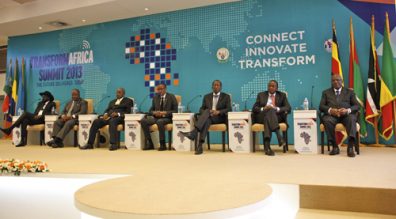 DCA attends Transform Africa 2013, calls for the progress of its .africa commitments be acknowledged

DCA was invited as a delegate to the international high-level conference that was held in Rwanda from October 28 to 31, 2013
Nov. 3, 2013 – The conference was attended by over 1,500 delegates and Seven African Heads of State including among others Presidents of Kenya, Uganda, Gabon, and Burkina Faso.  Other delegates included Ministers and CEO’s of blue chip firms.

The summit was Co-hosted by President Paul Kagame and Dr. Hamadoun Toure, the Secretary General of the International Telecommunication Union (ITU), with the aim of pooling together International participants to set a new agenda for Africa to leapfrog development challenges through the use and uptake of Broadband and related services.

Six years ago in 2007, Rwanda took the lead and mobilized the whole continent and the world around through ‘Connect Africa Summit’ and that agenda has spread across the globe where there is now a Connect Asia, Connect Americas among others.

The summit focused on increasing and improving content affordability in a bid to move Africa from a content generating continent rather than one that just consumes, entrepreneurship and local capacity were also deliberated upon. Good governance has also been identified as part of the catalysts of development.  ICTs as the latest focus platform were classified as an enabler and not a standalone system.

The four-day high level event was held under the theme, “The Future Delivered Today” will devise ways on how Africa can leverage broadband to transform communities, governments and the private sector.  It is organized by Rwanda a country that is passionate in its quest for change and is leading Africa in ICT and not only formulating but executing developmental strategic blue prints.

Dr. Hamadoun Toure, the Secretary General of the International Telecommunication Union (ITU) applauded the summit saying “this encapsulates the tremendous spirit of optimism and confidence which I see right across this great continent of ours”.  He went on to “ stress the importance of these three different stakeholders – communities, businesses and governments”

and emphasized once again that all three are absolutely crucial players if we are to achieve the substantial social and economic progress this continent deserves.

Speaking at the conference, the President of Kenya H. E Uhuru Kenyatta said ICT is no longer a luxury but a powerful tool that will help address most of the problems facing Kenya and Africa at large.  “We are determined to ensure that our people fully benefit from the advantages to ICT and related technology,” adding that “ICT is being used in security, checking corruption and promoting quality education, Innovations require young minds. Broadband is one way of propelling Africa to prosperity.”

Ms. Sophia Bekele, speaking at the “Infrastructure” session, gave update on the journey of DCA’s current project .africa Domain, saying ” Our organization   has been very much a part of the International conference that was first launched as ConnectAfrica 2007, when we introduced this very important Pan African initiative, to provide Africa an online digital identity.  This is evident from the list of projects still hanging as part of the ITU commitment on the ConnectAfrica website. http://www.itu.int/ITU-D/connect/africa/2007/commitments/…. search “dotafrica”:  At the time we committed 100k USD and 6 years later, we have raised over 1million US dollars and campaigned all over Africa to create awareness and the benefit to all African peoples and organization. We have since been credited by the African people and the African and International Media for our excellent work, over & over again”.

Asserting her organization’s position in the summit, she said “Our organization has pioneered this initiative and we want to register for the record that this Summit also acknowledges and registers our success. DCA is an African company that has met and exceeded its ConnectAfrica 2007 commitments and 6 years later is Transforming Africa through ICT.  We want the Summit to acknowledge our Success.”

In yet another session, Bekele posed questions and made comments on what should be included in the “Smart Africa Manifesto”, an ICT Vision championed by Rwanda Ministry, as an outcome to the conference.   “It is a very topical issue that will be much more relevant in near future will be, what is Africa’s articulated position on Global Internet Governance and Policy vs-a-vis the present divergence of opinion that has become rather evident; whether continuing with the status quo driven by US-based institutions or facilitating a change to the UN/ITU led model as proposed by some countries?”, asked Bekele.

She also asserted “There needs to be a structured involvement of Youth and Women in ICT within the foundations of a strategy.  There is a strong need to encourage women and youth to embrace ICT.  Where technology had a base in engineering, which attracted mostly men in the past, now women can get involved in the marketing and social media, a growing segment of ICT.  Finally, Public Private Partnerships should be encouraged with balanced and open transparent bidding avenues”.

Rwanda’s Minister for Youth & ICT, Philbert Nsengimana called for the implementation of the manifesto and ensuring the success of the SmartAfrica agenda. “Let’s make the dream of ‘SmartAfrica’ become true. SmartAfrica will become a reality very soon.” He said. The new manifesto is built on five principles: To put ICT at the centre of our national socio-economic development agenda, To improve access to ICT especially Broadband, To improve accountability, efficiency and openness through ICT, To put the Private Sector First, To leverage ICT to promote sustainable development.

DotConnectAfrica is confident that the future of Africa is secured today by ensuring that proper systems of governance is set up in order to encourage technology development that will transform Africa.  Africa is full of potential and through such initiatives as generation.africa and miss.africa, launched by DCA already, more youth and women will be empowered to drive the continent to a new level.

Participants hope to monitor progress through the Smart Africa Alliance, a partnership between participating African states, the Africa Development Bank, the World Bank, the ITU, and the private sector.